The Atlanta-Fulton County Emergency Management Agency (AFCEMA) is responsible for keeping people safe in Fulton County, GA - the state's most populous county, which includes the city of Atlanta. Fulton County spans 534 square miles and is home to more than one million people. 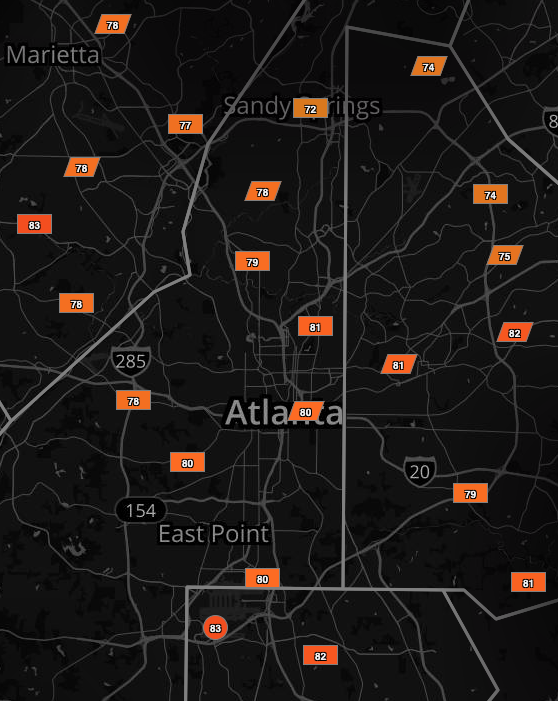 AFCEMA relies on a county-wide network of Earth Networks Weather Stations which feature a variety of sensors to monitor local conditions including temperature, wet bulb globe temperature, wind speed and direction, precipitation, and more, with updates every two seconds.

Using our patented total lightning detection sensors, AFCEMA has access to lightning data and early warning from the Earth Networks Total Lightning Network® — the largest and most advanced network for detecting both in-cloud (IC) and cloud-to-ground (CG) lightning.

Officials in Georgia’s Fulton County are always on the lookout for severe weather events like tornadoes and lightning storms.

Back in 2008, fast-moving storms moved through the Atlanta metropolitan area, generating hundreds of lightning strikes and causing fires. Then a deadly tornado outbreak swept across the southeastern U.S., causing extensive damage and injuries and forcing evacuations in downtown Atlanta.

Severe weather is a common occurrence in Georgia, which makes prioritizing safety on a neighborhood level a challenge, and these storm systems made it clear to the Atlanta-Fulton County Emergency Management Agency (AFCEMA) that better weather intelligence was needed to improve the emergency response. In an urban metroplex like Atlanta, the ability to calculate the touch-down point of a tornado before it occurs, or track fast-moving lightning storms, has enormous life-saving potential.

They turned to Earth Networks to build a hyperlocal network of weather stations with real-time data on current conditions.

Weather varies dramatically across different parts of Fulton County and pinpoint accuracy for the advance warning of severe weather is critical when attempting to keep people safe in Georgia's most populous county.

Atlanta-Fulton County Emergency Management Agency (AFCEMA) worked with Earth Networks to deploy a network of 50+ neighborhood-level weather stations throughout the county to improve the accuracy and precision of storm tracking.

Atlanta’s emergency managers are better prepared to respond faster and more efficiently deploy county resources to the areas that will be impacted most when severe weather threatens.

All disasters are local, which underscores the importance of having near real-time access to accurate localized alerts.

Download our Public Safety & Emergency Management info sheet for a quick overview of the tools and services we provide to emergency management teams across the country to help them track storms and prepare for an emergency response to severe weather.