This one-hour presentation focused on lightning safety and alerting was led by Dr. Michael Stock and Anuj Agrawal. Please enjoy the recording and contact us with any questions. Why are there so many lightning fatalities in Florida?

There are a couple of things that you expect to happen that contribute to the number of lightning fatalities in Florida.

The first is that there is just a lot of storms all the time. And so, you're outdoors in a very flat land, you're frequently the tallest thing around and the likelihood of lightning striking nearby you because there are so many storms goes up.

It's also a very touristy location where you have a lot of people that go out to the beach and aren't ready for it.

And then, because it's happening so often, you don't treat it as seriously as you would otherwise. If a storm is happening every day, you just sort of ignore it.

All of these things play into the number of lightning fatalities in Florida.

Why is a 30-minute all clear time the standard?

NOAA says to wait 30 minutes but when we take a look at this from the perspective of a lightning scientist, 30 minutes is a LITTLE bit conservative but not incredibly so.

Based on our research, when you go to look at the all clear time versus the lead time and you look at 30 minutes, if you go longer than 30 minutes, basically things don't get better. 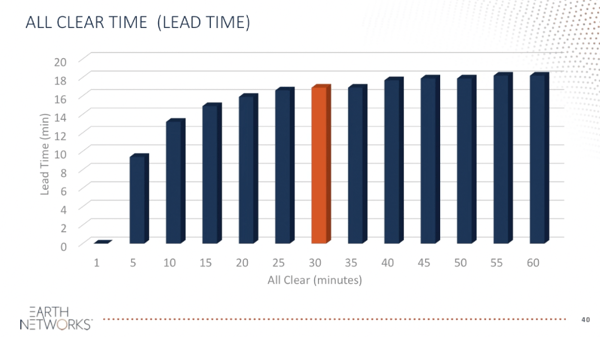 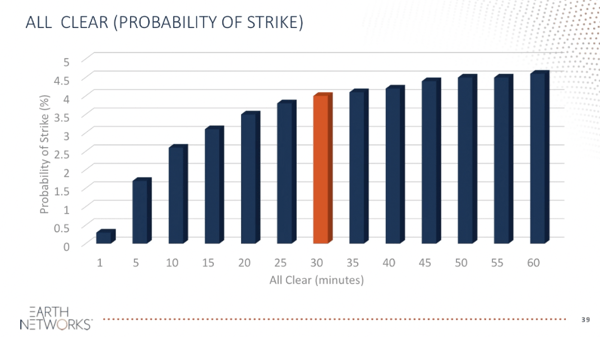 More importantly, from the perspective of NOAA, the issue is that they're looking at the chance that your storm is going to resume. So they're saying, that at 30 minutes, basically everything is flat. Your probability for a storm to resume is not getting better.

So if you take a look at a day in Florida, you have a 10% chance of a storm starting any day in the Summer, but as you reduce from 30 minutes this starts to go up and it keeps going up. So NOAA took this as the point at which to call 30 minutes as a good all clear time.

Which app is the most accurate for detecting lightning strikes?

To determine which app is most accurate for detecting lightning strikes, you would have to define what is meant by accurate (time of alert, distance to your location, etc.). Ultimately, the best way to gauge this would be a scientific study comparing the accuracy of various lightning detection and alerting apps.

As a general note, there are these personal lightning alerting systems you can buy. It's a device that you can get that "detects" lightning and tells you how far away it is. They are all substantially worse than any lightning location data out there. If you have data coming in from a location service, any service (not just Earth Networks), that is better (more accurate) than those handheld devices.

Those handheld devices are not great at detecting lightning and they're really, really bad at determining how far away they are.

So if you're looking at an app for detecting lightning, you want something that is pulling from multiple locations (like the Earth Networks Sferic Connect app).

How does the Earth Networks lightning detection system work?

We have about 1,800 lightning sensors that are deployed around the globe. They detect the radio signals from lightning and then they time that using accurate clocks to basically do time of arrival to determine where the strike is.

How often are new sensors being added to the Earth Networks Global Lightning Network?

We add about 100 new lightning detection sensors to the Earth Networks Global Lightning Network every year. Somewhere between 100 and 250. Depending on the year, it varies.

How many lightning detection sensors are needed to improve accuracy?

But when the density is low, when we don't have a lot of lightning detection sensors, then both detection efficiency and location accuracy improve by just adding sensors.

Once we get more than 1 sensor every 100 kilometers, things stop improving. That's a lot of sensors to cover the surface of the Earth (which is 510.1 million km²) but it is many, many more than we have today.

Will the tires on a car protect you if the vehicle is struck by lightning?

No, the tires on a car will not protect you from lightning.

So no, the current would definitely pass through the tires with no problem.

The reason that cars are safe shelters from lightning is because the body of the car is made of metal.

So the lightning, when it strikes the metal body of the car, tends to go around and through that "skin" and then not through you. Which is particularly convenient.

How safe do you find a vehicle to be during a lightning storm?

Pretty safe. It depends on the vehicle. NWS recommendations say a hard-topped vehicle. The reason they are safe are because you are surrounded by metal so there are going to be notable exceptions to this. In terms of safe places to be during a lightning storm, surrounded by metal is your best bet. We would call that a Faraday Cage. And the reason is that if lightning hits the vehicle, the currents will go around you rather than through you.

Can you drive a convertible in a thunderstorm?

Can you make a shelter more “lightning proof” by adding rods to it?

Yes. The requirement there is not just a rod but it needs to be a grounded rod. So you need to run a ground line, that ground line needs to be big enough that it can carry the current from a lightning flash. That current is high. It’s about 10,000 amps. More than you would get in a house system so usually those are ground straps.

What happens if you’re in a pool and lightning strikes?

So you’re in the water, if lightning strikes the water, the current is still going to travel along the surface of the water. Now if you imagine… if you’re standing on the ground, that goes up one leg and down the other. If you’re swimming, that goes through your head.

Are you more likely to see more lightning before the storm, during the storm, or after the storm?

What is the difference between systems that predict the likelihood of lightning using atmospheric components vs detection systems that use alert rings?

The prediction of weather has been getting better in recent years. So there are things that predict the likelihood of lightning, or really severe weather, to happen in a given day in a given region. And they're being developed all the time.

The predictive modeling is what you use to say, "Maybe I'm not going to have my picnic today and I'm going to move it to tomorrow."

Are they useful? Yes. But you shouldn't use them instead of alerting.

Should you have a separate lightning alerting policy for a practice vs a game?

Due to the amount of people to clear outdoor spaces during a practice versus a game, you could have a separate lightning alerting policy.

When setting your alert radius, you're talking about your lead time. So, if you envision that it is going to take you longer to evacuate people when you have a stadium full of people then it would make sense to have a larger alert radius versus when you have fewer people.

But, in practice, it's not the best idea. It's probably easier to have the alert radius be the same for any event. How many people you have and how quickly you can get them safely to shelter should determine your weather safety and lightning alerting policies.

Does the flash-to-bang method work for determining how far away lightning is?

It works. So if you measure the time between when you can see the lightning and when you can hear it, so long as there is not too much thunder, you can actually range the flash that way. That does actually work.

The catch there is that when you count the seconds, remember that it takes 5 seconds for lightning to travel 1 mile.

So say it takes 10 seconds between when you see the flash and when you hear it, that means that flash is 2 miles away.

A common mistake, is that people say lightning moves 1 mile per second and that's not true. Sound is 1 mile and 5 seconds.

Is there any safety to people standing on rubberized surfaces like tracks, artificial turf, etc?

No. There is no safety from lightning for people standing on rubberized surfaces.

What is heat lightning?

Heat lightning is just lightning that is too far away to hear the thunder. Some nights in the summer, you can see distant lightning from a storm over the horizon, maybe 200 miles away. This is lightning flashes off of clouds high up in the sky.

There are four main ways that we send lightning alerts to our customers.

Email (1) or Text (2) Notifications - When an alert gets triggered, you can have it sent to an email address or to a mobile device via text message.

Mobile Push (3) Notifications - With either Sferic Mobile or Sferic Connect you can enable location tracking and set up push notifications. When you use the mobile app, you're actually getting notifications on alerts that you've set up for a physical location, like your school or office building, but you also get a notification for your current location using the phone's GPS.

Outdoor (4) Mass Notifications - If you need to alert a large group of people, you do that through a Sferic Siren notification.

You can learn more about the different types of Earth Networks lightning alerts here.

Where does the forecast come from in Sferic Connect?

The forecast in Sferic Connect is our own proprietary forecast, we call it ENcast.

How do you set the alert range on Sferic Maps?

Alerts are configured from the enterprise portal of your account at profile.earthnetworks.com.

The alert range will be set in the Manage Rules tab during rule configuration.

This 14-minute video walks you through the process of configuring alerts in Sferic Maps.

For more video tutorial, visit our support center at support.earthnetworks.com/TrainingVideos.

In general, no there isn’t. Showing both is going to do a better job of showing where the storm is and where the center of the storm is. We have not seen any operational advance to looking at only cloud-to-ground lightning.

Have another question? Send us a message.

Try your hand at some trivia.

Learn what we can do for your organization