Work Week Starts Quietly For Most

Work Week Starts Quietly For Most

The final workweek of January begins with clear skies across most of the U.S., but storminess is still brewing in the Mountain West. 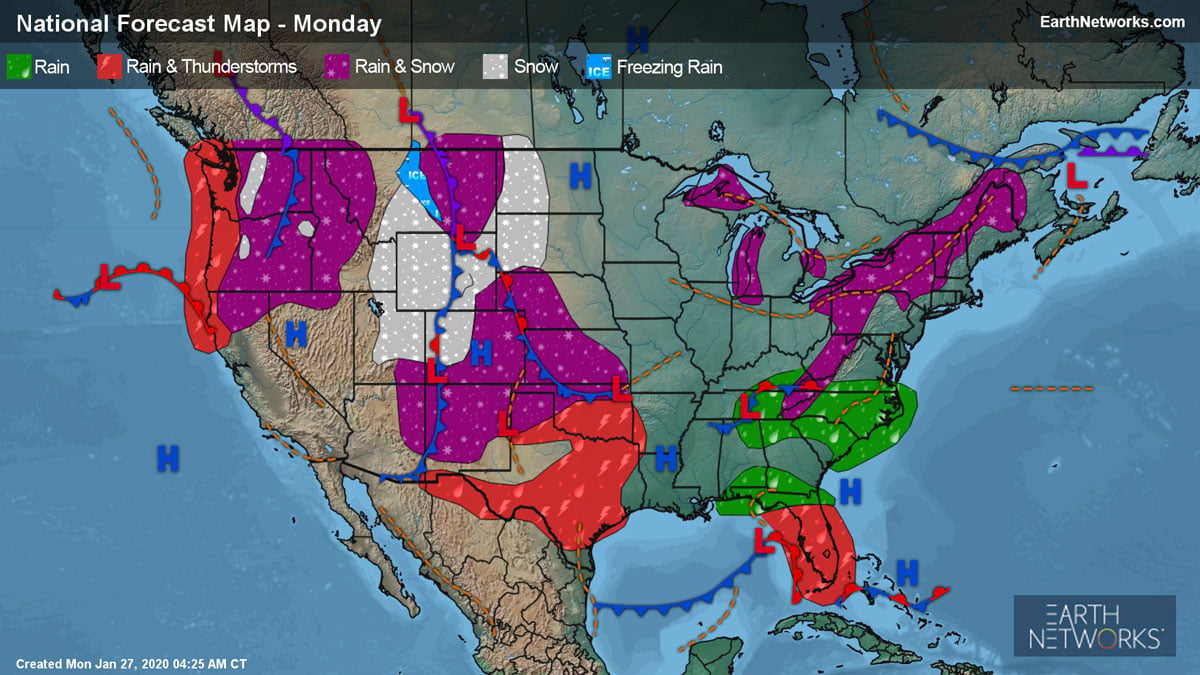 Pacific low-pressure continues to batter the Northwest and spread plenty of rain along the coast and snow atop the mountains. The newest wave of wintry mix will leave the Cascades, Great Basin and northern and central Rockies under a fresh blanket of snow, while the Washington and Oregon coast and foothills will need the umbrellas.

Parts of the Southwest and southern Rockies, including the Four Corners, will also see scattered rain and snow showers.

A few disturbances will move across parts of the East today. Rain will fall along Mississippi, Alabama and Florida’s Gulf Coast as well as the Tennessee Valley. Great Lakes lake effect snow will push into northern New England but the heaviest snow will be localized.

The Plains and Mississippi Valley will see a quiet day with clouds building towards the afternoon and evening.

A cold day is in store for much of the northern tier. Frigid teens to 20s will keep the Rockies, Northern Plains and Upper Mississippi Valley shivering to start off the workweek. The Great Lakes into the central Plains will range from the mid-20s to mid-30s while the Great Basin, High Plains, Ohio Valley and Northeast will peak in the low 30s and low 40s.

The Pacific Northwest and Kansas will have highs in the mid to upper 30s and low 40s. California, the Southwest and Mid-Atlantic will all be split between mid-40s to low 50s along their northern fringes and mid-50s to mid-60s on their southern edges. The warmest temperatures will belong to the South once again with highs in the 50s and 50s for the Southern Plains, Lower Mississippi Valley, Southeast and Florida.  .

Rounds of rain and mountain snow will continue to slow travel across the northwestern U.S. through midweek as the neverending stormy pattern continues. 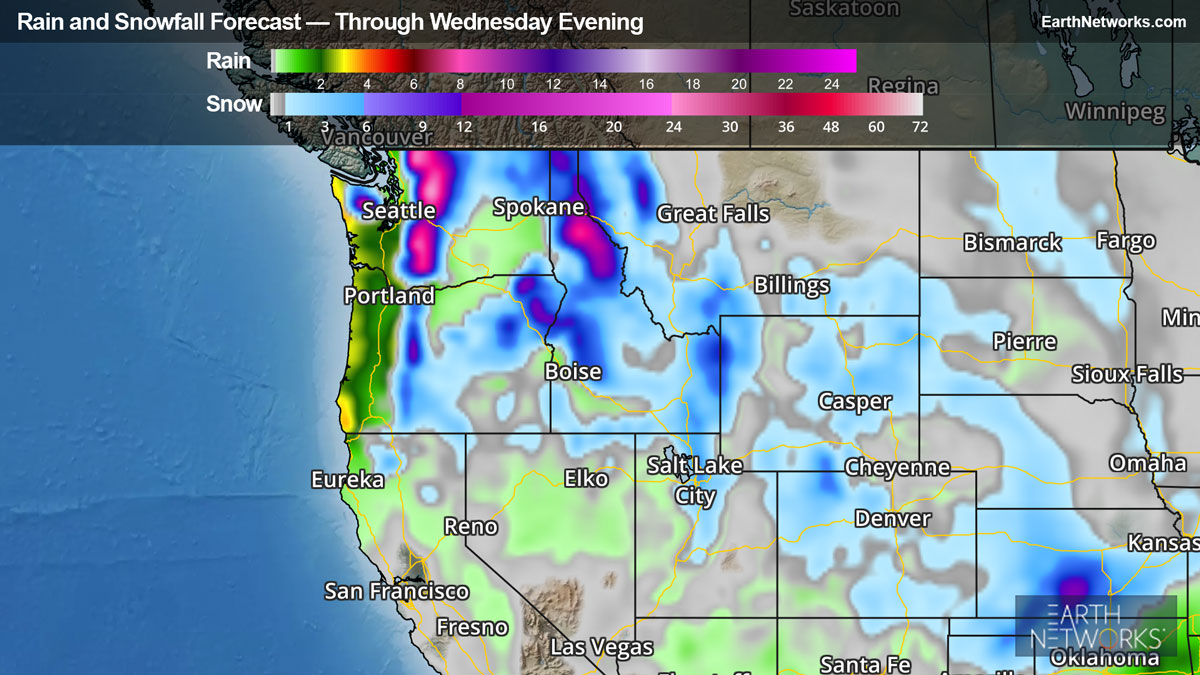 A fresh round of rain and snow has begun to roll across the Pacific Northwest while snow showers continue across parts of the Rockies and Intermountain West. With more wet weather in sight, flooding is the biggest concern.

Heading into today, heavy rain will soak commutes for coastal Washington and Oregon, while snow will cause slick travel across the northern Great Basin and Rockies.

Currently Winter Weather Advisories are posted for east-central Idaho, southwest Montana and south-central Wyoming through this morning where 4 to 10 inches of snow could fall over the highest elevations.

In addition, heavy snow mixed with rain and sleet have made dangerous conditions for the Cascade mountain slopes. The mixture of heavy rain and warming temperatures are the ingredients necessary for the potential of avalanches, especially north of Interstate 90 and along highway 20.

The parade of storms will continue Wednesday, with a new storm system creating even more rain and high elevation snow across the region. One to two feet of new snowfall will likely top the peaks of the Cascades by midweek.

Coastal creeks and rivers are also susceptible to additional flooding and mudslides are possible in the coastal range. If you come across a flooded roadway, “Turn Around, Don’t Drown!”

Regardless of what’s to come, it’s not a bad idea to have an emergency kit ready in case of sudden weather emergencies. Chains, water, warm clothes and blankets all can assist with keeping you safe when dangerous weather happens.

The recent storminess has helped the Northwest’s long-term precipitation deficit. Seattle’s precipitation is more than an inch above average for the month, but the city is still around a half-inch below average since early autumn. Portland, Ore., is also 1.50 inches above average for rainfall this month while Olympia, Wash., has been soaked with more than 5 inches above normal January averages.